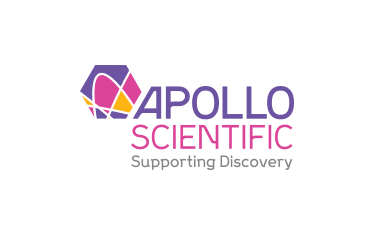 By the time of Apollo’s next move in 1998 to a 350 sq.metre site in Whaley Bridge, Derbyshire, the company had grown to ten staff and a turnover approaching 1.5 million pounds. Its fluorochemicals catalogue that year listed nearly 4000 compounds.

With the benefit of many visits to production facilities in China, reliable, high quality producers were located. With agreements then in place, when an intermediate sourced from Apollo showed potential it was then possible to offer it in quantities exceeding 100Kg. Indeed, one of these relationships in particular enabled Apollo to become a significant supplier of fluoroaromatic compounds into the European liquid crystal market.

In 2001 Apollo decided it required its own small scale manufacturing in the UK. Renting 600 sq.metres of modern laboratories and offices on the Hickson and Welch site in Castleford and recruiting highly skilled PhD chemists, Apollo quickly established a strong reputation for manufacturing novel and interesting fluorochemical and heterocyclic building blocks, aimed primarily at the pharmaceutical research scientist. Working in up to 20 litre glassware, Apollo’s manufacturing strengths have included Grignard technology, Balz-Schiemann and most classical and modern chemistry.

Throughout this time Apollo built on its success as a major supplier of fluorochemicals by diversifying into other non-fluorinated compounds, driven by identifying interesting functionality. Catalogues of organic intermediates and biochemical reagents were produced. Apollo continued to grow.

By the time of Apollo’s next move in 2002 to a 1000 sq.metre site (extended to 1350 sq.metres in 2007) in Bredbury, Stockport, the company had grown to thirty staff and a turnover of nearly 4.5 million pounds. Its fluorochemicals catalogue that year listed around 7000 compounds

Central Glass has a history of over 70 years of commercial production of a wide range of fluorochemical products, including Trifluoromethanesulphonic acid and its anhydride, chiral and achiral fluoroorganic products, speciality fluorinated gases and fluoropolymers. Through Central Glass Apollo now had access to pilot plant and full scale production facilities running to ISO and GMP standards.

The next four years saw Apollo grow rapidly as it expanded its range of products, produced larger catalogues, increased its levels of stocks significantly and recruited more technical staff. Typically annual turnover during this period grew by nearly 25%. By 2007 Apollo’s turnover had exceeded 12 million pounds with a net profit before tax of nearly 20% of sales turnover. With over 50 staff (nearly half graduates in chemistry to first degree or PhD level) Apollo now offered over 42,000 compounds (including over 12,000 fluorochemicals) through its website and catalogues. The Bredbury site was certified to the ISO9001 standard towards the end of the year.

In early 2008 a major expansion of Apollo’s facilities took place. This added about 2200 sq.metres of warehouse and laboratory space (including a dedicated analytical laboratory) and a further 150 sq.metres of office space at an additional new site in Denton, Stockport. Even with the closure of the laboratories at Castleford this still meant Apollo’s capacity for its own production had doubled. This has been essential to meet the increasing outsourcing research chemical demands of the pharmaceutical companies.

With its new, much larger warehousing Apollo can now look to improve its service to its many thousands of customers throughout the world by increasing its levels of inventory and further improving its dispatch infrastructure.

At the end of March Central Glass increased its shareholding in Apollo to 91%. This has enabled Apollo to position itself more strategically in the research and development marketplace.

Central Glass had previously acquired the R&D company Synquest Laboratories Inc. (Florida, USA) back in 2002. Synquest is a manufacturer of a range of speciality fluorochemicals, including gases and aliphatic compounds. It has particular strengths in high pressure autoclave work and precise distillations. It distributes a catalogue listing over 3500 fluorochemicals.

With Apollo now working much more closely with Synquest and Central Glass, the three companies can help each other with the production and marketing of their fluorochemical product ranges throughout the world, from research quantities in the laboratories to full scale pilot plant production. Announcements as to the form these collaborations will take will be made at forthcoming exhibitions.

Apollo can certainly look back with pride at its rapid growth and successful history.